Since gaining FDA-approval in 2002, Botox has grown exponentially in popularity as a minimally invasive way to reduce the appearance of wrinkles and prevent underarm sweating. This simple, non-surgical injection is often used to temporarily reduce or eliminate forehead creases, crow’s feet near the eyes and thick bands in the neck.  And while effective, there are several things patients should take into consideration before, during and after a Botox procedure:

Avoid alcohol two days before the treatment and do not take aspirin or anti-inflammatory medications two weeks prior to injections.  This may prevent bruising.

Remember that it takes three or more days to see an effect. Don’t expect the injection to last forever; the effects of Botox last about three to four months before it’s time for another appointment.

Patients who are pregnant, breastfeeding, or have a neurological disease should not use Botox.

4. Know the side effects

Minor bruises and temporary headaches are the most common side effects following a procedure, and are usually short lived.

With repeated treatment, wrinkles often appear less severe over time because the muscles are trained to be less active. In younger patients, Botox may even prevent minor wrinkles from forming.

Botox may not work for all wrinkles. If you’re considering injections, you should first contact a certified plastic surgeon or dermatologist for a complete consultation. 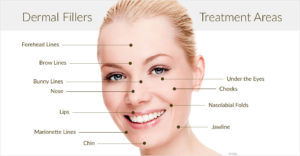 What’s The Difference between Botox and Dermal Fillers?

Lines in a person’s face that are “relaxed” lines do not work well with Botox. They’re better treated with dermal fillers. Dermal fillers work to rid a person`s face of fine lines and wrinkles while Botox, on the other hand, lessens deeper lines. It works best at reducing ‘facial expressions’ that cause a person to appear angry or upset. As well, Botox is considered a ‘poison’ even though it is used as a medical treatment for health conditions that aren’t cosmetic.

As well, facial fillers injected into person’s face are made from Hyaluronic Acid (HA) which is a naturally occurring sugar in the body. As people (especially women) age their supply of HA diminishes. This means the chemicals that once supported their skin lessen resulting in lines and wrinkles. A common brand name for facial fillers is Juvéderm which is produced in various forms.

What Happens In A Botox Consultation With Your Doctor?

Botox minimizes harsh facial expression and deeper lines and it also lasts most patients between three to six months per session. Patients desiring Botox should make an appointment at a professional medical spa, where they can point out certain lines on their faces they dislike, to their Doctor.

Then, their Cosmetic Doctor will look at not only treating these ‘specific lines’ but will also look beyond a person’s facial lines to develop a plan to treat a woman’s face in its entirety. If a Doctor only treats a single facial line, this can appear unnatural or out of place on a person’s face.

As well, many women, come into their Doctor’s office to receive Botox, as their friends or people they work with have mentioned the person’s consistent upset or tired look. When this is the case, it’s not usually one line causing a tired or upset facial ‘impression’ but there are numerous aspects that the Doctor will look at along with treating that ‘particular’ facial expression.

How Often Are Botox Injections Needed?